We respect your inbox. We only send interesting and relevant emails.

Paul is a 40+ year resident of Guelph; a University of Guelph Grad in 1986 with a degree in management economics...

Record setting price levels don’t seem to be discouraging buyers in the Guelph real estate market from stepping up to the offer table.  A 13% increase in the number of homes sold this past week over the same period in 2018 helps to substantiate that claim.

What’s driving the Guelph market when other areas such as the GTA have been dealing with decreasing prices and activity over the past year? 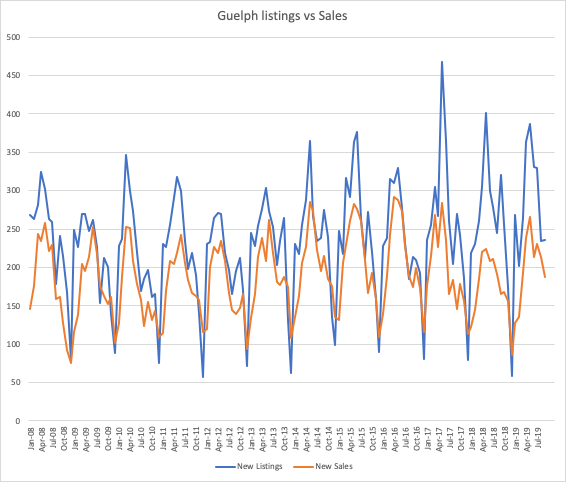 We looked at the number of listings that have been coming into the Guelph market over the past 10 years.  We have averaged 236 new listings entering the MLS® system in Guelph each month.  The Orange line in the chart reports the number of sales each month for the same time period, with the average being 187 homes per month.  You would think that with an excess of 49 homes per month going unsold that inventory levels would be building significantly.   That’s not the case and that’s one of the reasons the median price in the Guelph real estate market continues to outpace the provincial and national numbers.

We looked at the listing data over the past 45 days in the city of Guelph.  We wanted to see what has been listed, sold (conditionally and firm) and listings that were cancelled over the same 45 day period. 97 listings were cancelled over that time period.  Of those cancelled listings 68 of them were quick re-listed and back on the market, which also meant they were counted as a new listing again.  The picture quick resolves that up to 10% and possibly more of the “new” listing inventory each month is in fact a re-list and is being double counted.

That means that the cushion of inventory doesn’t build at quite the level we expect if we look at the chart.  This distortion is magnified in some price points and neighourhoods particularly in the condo and over $800K price points.  The higher numbers of new listings would indicate plenty of inventory coming into the market place when in fact a significant portion is being recycled.  We recently saw one agent boast on his sign the property just sold over list and in under a week, when in fact it had been over 60 days on the market and the price had been significantly dropped.  When it was cancelled and re-listed at the new price it did indeed sell quickly, got multiple offers, and did sell higher than the new list price.  I think you get the picture on how the median and average numbers can now be distorted.

So what does this have to do with our escalating prices?  Historically, inventory levels have and continue to be tight in our market.  When you look at the months of inventory chart for our regional market you quickly see that Cambridge and KW all seemed to maintain higher inventory levels than Guelph.

It’s only been in the last 2 years that those other markets have converged to the Guelph level.  At the end of the day, low inventory levels translate into higher sales prices due to the lack of available homes to look at.

Couple already low inventory levels with significant growth in the local population and builders not building as many detached homes as before, and you can see how the level of demand keeps favouring sellers.  We don’t expect this to change significantly for the foreseeable future.

Good news if you are a seller - especially the baby boom generation that is starting to sell and downsize.  As a buyer you are still going to be challenged to find a “deal”.  Your best opportunity lies in being well prepared to enter the market by having all your ducks in a row.  Our team at HGR knows how to best prepare you to jump into this market.  Call us for a consultation.  It could make your real estate journey a much better experience.

The Guelph Jazz Festival is on this weekend.  Home Group Realty is proudly sponsoring this event.  The festival features a ton of great talent - amateur and professional.  Check out the free concerts Saturday at the Market Square Stage, you won’t be disappointed!

The classic features of this 1870s brick home have been beautifully preserved and upgraded with designer touches. From the dynamic main floor layout, to the oversized front porch and mature backyard, this home is overflowing with gorgeous entertaining spaces.

Want to know what

Get access to weekly sales reports for all of Guelph's neighbourhoods.

GET EXCLUSIVE ACCESS TO LISTINGS BEFORE THEY HIT THE MARKET

Thanks for subscribing!
We'll send you an exclusive list of properties not yet on the market, every Wednesday afternoon.
See the Most Recent Report

We respect your inbox. We only send interesting and relevant emails.

We use cookies to enhance your browsing experience and deliver our services. By continuing to visit this site, you agree to our use of cookies. More info

This website is operated by Home Group Realty Inc., a Brokerage who is a member of The Canadian Real Estate Association (CREA). The content on this website is owned or controlled by CREA. By accessing this website, the user agrees to be bound by these terms of use as amended from time to time, and agrees that these terms of use constitute a binding contract between the user, Home Group Realty Inc., and CREA.

The content on this website is protected by copyright and other laws, and is intended solely for the private, non-commercial use by individuals. Any other reproduction, distribution or use of the content, in whole or in part, is specifically prohibited. Prohibited uses include commercial use, “screen scraping”, “database scraping”, and any other activity intended to collect, store, reorganize or manipulate the content of this website.

REALTOR®, REALTORS®, and the REALTOR® logo are certification marks that are owned by REALTOR® Canada Inc. and licensed exclusively to The Canadian Real Estate Association (CREA). These certification marks identify real estate professionals who are members of CREA and who must abide by CREA’s By-Laws, Rules, and the REALTOR® Code. The MLS® trademark and the MLS® logo are owned by CREA and identify the professional real estate services provided by members of CREA.

The information contained on this website is based in whole or in part on information that is provided by members of CREA, who are responsible for its accuracy. CREA reproduces and distributes this information as a service for its members, and assumes no responsibility for its completeness or accuracy.

Home Group Realty Inc. may at any time amend these Terms of Use by updating this posting. All users of this site are bound by these amendments should they wish to continue accessing the website, and should therefore periodically visit this page to review any and all such amendments.